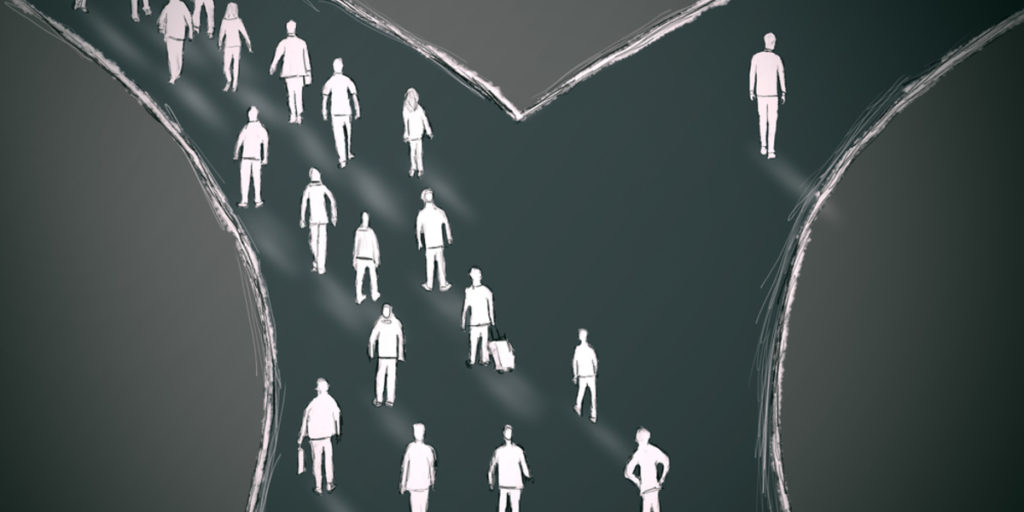 Researchers have long known that patients with a greater number of CAG repeats in their HD gene tend to display motor symptoms sooner than those with fewer CAG repeats. However, this relationship is not perfect. Sometimes HD patients display symptoms at a drastically different time than expected based on the number of CAG repeats alone, suggesting that maybe other genetic or environmental factors speed up or slow down the progression of HD. A recent study suggests that comparing patients with the most ‘extreme’ motor symptoms may help to uncover exactly what these factors are.

As you likely know, Huntington’s disease (HD) is caused by a mutation in the gene that provides instructions for creating a protein confusingly called huntingtin. Much like a misprint in a cookbook, a long repetitive stretch of DNA letters (C-A-G) in the huntingtin gene provides a faulty set of instructions for building the huntingtin protein. Ultimately, the misprint alters the function of the huntingtin protein, and symptoms appear over time: difficulties regulating emotional states, disturbances in mood, trouble thinking clearly, and movement problems.

Some Move Faster than Others

As it turns out, there is a well-established trend suggesting that people with a greater number of CAG repeats will enter the manifest stage of HD and begin to display motor symptoms sooner than those with fewer CAG repeats.

While this trend can allow us to make a good guess as to when motor symptoms signifying manifest HD might begin to appear, the relation between CAG repeats and the manifestation of motor symptoms is not a perfect one. Some individuals display motor symptoms much earlier or much later than we would expect given their CAG repeats. Because of this, many scientists have come to believe that there are other factors or ‘modifiers’, either genetic or in an individual’s environment (e.g. types of medications, education, exercise, etc.), that cause the appearance and progression of HD-related symptoms to vary from person to person.

Despite plenty of work on these disease modifiers, we have not yet been able to tease apart exactly which factors are protective against disease progression, and which may speed up the advancement of the disease. It would be especially helpful if we could compare a large number of HD patients to identify which factors are most common, and tease apart which have the largest impact on HD progression. This idea has become the starting point for a group of researchers led by Michael Orth at Ulm University in Ulm, Germany.

Taking it to the Extreme

To get to the bottom of which disease modifiers exert an influence on HD progression, Orth and his team argue that researchers should examine the extremes found in the HD population. In other words, we should look for HD patients whose progression falls well above or below the average (given what we know about their CAG repeats and age), and then look for any common themes that may explain their ‘extremeness.’ This idea is a good one, and if we can ultimately identify the exact reason(s) why a group of patients is doing so well or so poorly, we may be able to use the information to help make decisions regarding what types of therapies or interventions to recommend for others.

The (Beginning of the) Hunt for HD Modifiers

How exactly should we go about deciding if a person is extreme or not? To answer this question, Orth and his team used a special type of statistical technique called ‘regression’. Regression techniques are used to predict some sort of outcome based on its relationship with other measured information, for example, the onset of motor symptoms based on its relationship with CAG repeat length. It’s also possible to assess how accurately we can make predictions. While the intricacies of this process are beyond our scope, a general rule of thumb is that the more data we collect, the more accurate we will be at making predictions.

Thanks to the hard work of the HD community over many years, Orth and his team of researchers were able to analyze A LOT of data. By combining the data from two observational studies, called REGISTRY and COHORT, Orth and his team included data from approximately 10,000 HD participants and 1,300 healthy controls, combining to over 30,000 visits!

From these studies, the measures that Orth and his team were especially interested in, besides CAG repeat length, were Total Motor Score (collected from the UHDRS scale), and age at motor onset (the age deemed by an investigator that motor symptoms first appeared). Then they used statistical analysis to define ‘extreme cases’ as those falling outside the bottom 2.5% or the top 2.5% of scores on each measure.

This information provides guidelines that can be used to classify new data from future studies as either within the boundaries, or as ‘extreme’. We want to pay special attention to individuals in the ‘extreme’, because disease modifiers may be having a stronger effect in them. And since the guidelines are built on such a strong foundation of data, we can be confident they will be accurate in helping to identify these individuals for inclusion in future studies.

The researchers uncovered some other important findings as well. For instance, HD patients who obtained an extremely early age at motor onset diagnosis did not necessarily continue on to record ‘extreme’ Total Motor Scores later, suggesting that factors affecting onset of disease may be different than those that influence severity afterwards.

While Orth and his team have not yet uncovered the specific factors that contribute to modifying the onset and progression of HD, they have provided a strong framework for identifying and selecting the HD patients that are most likely to help us discover them. This information will set the stage for exciting new research to help determine which factors are most successful at delaying the onset of motor symptoms in HD and slowing their progression. There’s an immediate benefit too: clinicians who treat HD patients now know how to identify ‘extremes’ and can look for environmental factors, such as medication, that might be responsible.

This study is impactful because of the huge data set that went into it. HD families should be proud of their contributions and excited to be building the knowledge we need to find a treatment for HD.