Could molecular handcuffs lower the protein that causes Huntington's disease? 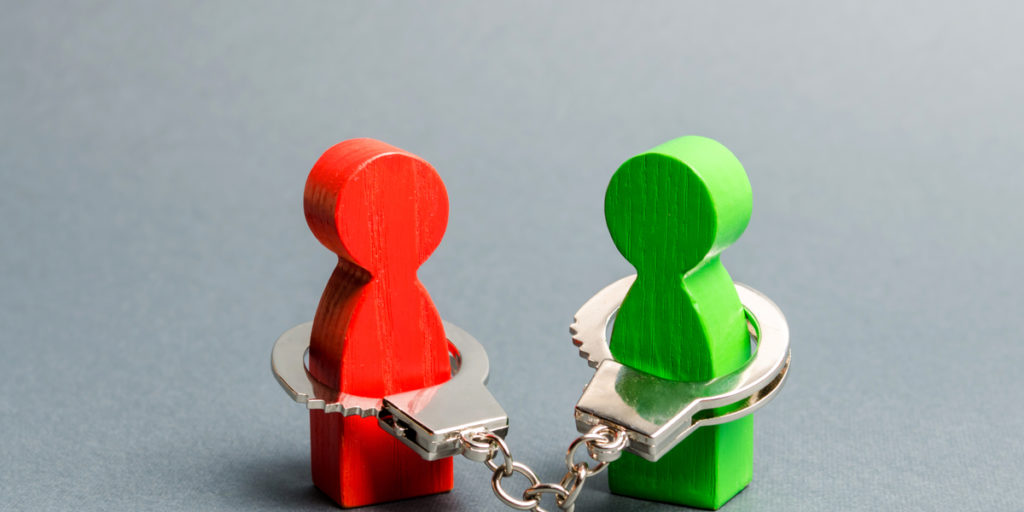 Several approaches are being taken to lower the amount of the toxic huntingtin protein as a way to treat Huntington’s disease. Last week, a study reported a new strategy that helps target huntingtin for disposal by the cell. This approach is in its earliest stages and requires more testing, but the concept is sure to be investigated further.

Nipping the problem in the bud

The one good thing we can say about Huntington’s disease is that, unlike many neurodegenerative diseases, we know the exact culprit: the huntingtin gene. Everyone has the huntingtin gene, but people with HD have an expansion in theirs.

A study published in the journal Nature last week reported a possible new way to lower mutant huntingtin levels. Researchers turned to one of the cell’s waste management systems, called ‘autophagy’. Autophagy is an orderly way for cells to recycle unnecessary or damaged parts. The unwanted parts are swallowed up by big bags of digestive juices, and broken down, just like garbage bags left on the curb are thrown into a city garbage truck and hauled away.

Imagine if we had a set of molecular ‘handcuffs’ that could tether the mutant huntingtin protein to the garbage truck? Then it would always be cleaned up, with no chance to accumulate and cause problems in the cell. That’s exactly what a research team from Shanghai set out to find.

Molecular handcuffs with the right fit

The team started their search with a list of existing drug candidates – things like FDA-approved drugs and natural remedies. This is called a drug library. They stamped each of the small molecules into tiny, clean-cut dots arranged in a grid on a glass dish.

Then they turned to a protein called LC3, which is in charge of capturing cargo destined for disposal in the cell. LC3 is like the garbage collector who hangs off the back of the truck, methodically picking up garbage bags around the neighbourhood and dumping them into the compactor.

In the study, the LC3 protein was passed over the plate of small molecules in hopes that some of the small molecules would fit the shape of LC3, latch on, and stick LC3 onto the dish.

A fancy light-bouncing technique was then used to detect any dots on the plate that had captured both proteins – mutant huntingtin and LC3. The molecules in these dots were the first candidate molecular handcuffs that could link mutant huntingtin to the LC3 garbage collector.

To further refine the search, normal (non-expanded) huntingtin protein was also passed over the plate, with the purpose of ruling out any molecules that bound to normal huntingtin. The reason for this is that normal huntingtin has many important functions in the cell, so it makes sense to search for drugs that selectively lower the toxic mutant huntingtin, leaving normal huntingtin alone.

Although the research team started with a relatively short list of small molecules for a study of this type, they were apparently lucky enough to find not one, but two that stuck to both mutant huntingtin and LC3. Based on the chemical structures of these ‘hits’, they then came up with two more potential mutant huntingtin-LC3 handcuffs, for a total of four.

Do the handcuffs help get rid of of huntingtin?

The candidate molecules were first tested in cells grown in a dish. From HD mouse model brain cells, to skin cells from HD patients, to HD patient cells that have been converted to neurons, the molecules appeared to lower the amount of mutant huntingtin while leaving normal huntingtin alone. The same was true in a fruit fly model of HD, and three of the four candidates even reduced mutant huntingtin when injected into the brains of HD model mice.

HD patient cells, grown in a dish and converted to neurons, usually die more easily than those from a person without HD. The candidate small molecules improved this somewhat, and also increased the lifespan and climbing ability of HD model fruit flies. In model mice, some HD-like symptoms were also improved.

Does this mean we have a treatment for HD?

As we have reiterated many times here at HDBuzz, mice are not people and so far, every potential drug that worked in mice has failed in humans. The excitement behind this study lies in the idea of tethering mutant huntingtin to the cellular waste disposal system, an idea that is sure to be followed up and refined as the research moves forward.

It is also an approach that could work really well in combination with others that are already being tested. Just as a bath will empty faster if you turn off the faucet and pull out the plug, so reducing the manufacture of huntingtin protein and speeding up its removal from cells could be a powerful combo.

One thing raising eyebrows among HD drug-hunters about this study is just how lucky the team was to find two molecules that did what they wanted, even though the library they started with wasn’t enormous. That doesn’t mean the results are untrue, but it could mean that the test of handcuff stickiness was easier to pass than they thought. If so, there might be unanticipated “off-target” effects if the molecules they found are generally sticky, and just happened to stick more to mutant huntingtin and LC3 than to healthy huntingtin.

All this calls for what one of our particularly smart friends called “orthogonal validation”. That means that the handcuff molecules need to be tested by an independent team of researchers, to double check that they are as good as they sound, and to check for any potential downsides that the first team might have missed.

Since the molecular handcuffs identified in this study are already available to HD researchers everywhere, you can bet they will be added to laboratory tool sets around the world.