Slightly long CAG repeats are more common than we thought 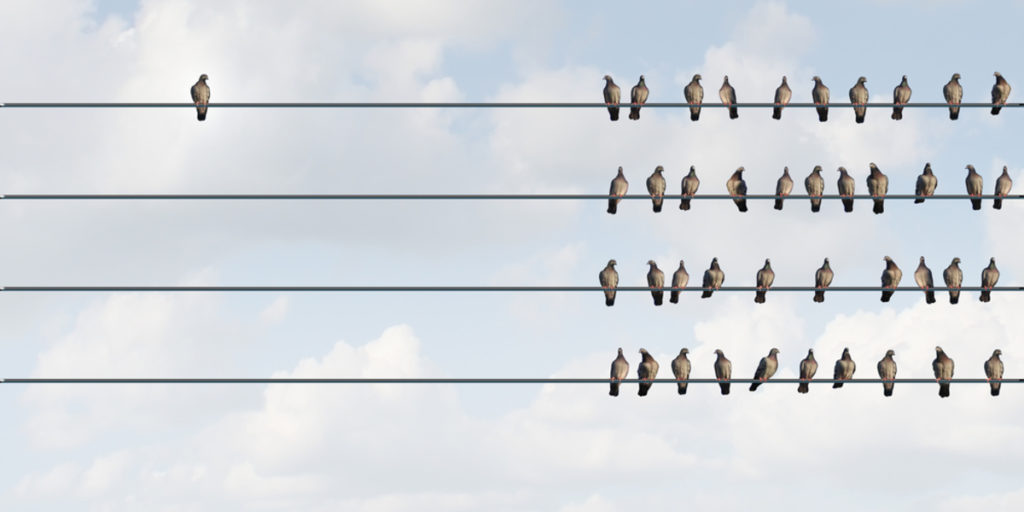 Everyone with Huntington’s disease has inherited the same type of mutation from their mother or father, an extra-long repetitive stretch of the sequence C-A-G in their HD gene. But the length of the mutation varies between individuals, and longer repeats are associated with earlier onset of symptoms. A huge new international study reveals that slightly longer-than-normal CAG stretches are much more common than we thought. Surprisingly, this turns out to be good news.

Every HD patient has inherited at least one mutant copy of a gene we sometimes call the HD gene, which scientists know better as Huntingtin or HTT. The mutation has the same basic pattern in every HD patient – the extension of an already repetitive bit of DNA near one end of the HD gene that has the DNA sequence C-A-G.

People without HD still have two copies of the HD gene (one from mom, one from dad), which also contain long-ish repetition of about 10-20 repeats of the sequence C-A-G in each of those genes. So Huntington’s Disease isn’t the result of inheriting a gene that other people don’t have, but rather inheriting an HD gene with a slight extension of a repetitive sequence found in everyone.

While each person with HD has the same type of mutation, the severity of that mutation varies across individuals. The average length of this stretch in HD patients across the world is about 42, though in rare cases people inherit very long repeats (as long as 180 CAG’s). Super long CAG repeats are associated with very early childhood onset of HD, while people inheriting shorter repeats tend to have onset later in life.

Because this relationship between C-A-G size and average age of symptom onset, there has been a lot of scientific interest in better understanding exactly how different CAG sizes affect people who inherit them. The connection was first described in 1993, when scientists discovered that all HD patients had long CAGs, whereas everyone they studied who didn’t have HD had shorter CAGs.

Since that discovery, researchers have studied thousands of individuals from HD families, both those that inherited the mutation and those that didn’t. As a result of all this work, they have discovered the rules that govern the link between CAG length and HD. These can be quite confusing for HD families trying to understand genetic testing results. HDBuzz has covered these rules in detail before, so you can see these stories on the so-called genetic gray area and what it might mean for brains.

To recap what we know at this point: people who inherit a CAG size of 40 or greater will develop HD for sure, if they live a normal lifespan. People with 35 or fewer CAG repeats will never develop HD, how ever long they live.

It’s the situation of people who inherit CAG sizes very near these cut-off sizes that can be a bit confusing. Traditionally, researchers have divided these mutations into two different categories – reduced penetrance and intermediate alleles.

The first group includes people who inherit a CAG size of 36-39 repeats. Doctors and researchers classify them as having inherited a reduced penetrance mutation. Some people who have a CAG of, say, 37 may live a full natural lifespan without ever developing HD, whereas others will show signs of the disease in their life. Penetrance is a word scientists use to describe how many people with a genetic change will show the disease associated with that change. CAG sizes above 40 are fully penetrant, meaning that everyone who inherits them will develop a disease given a normal lifespan.

On the other end of the cutoff, people who inherit between 27 and 35 CAG repeats in their HD gene will never develop HD, as far as we know. This comes from studying thousands of people from HD families with those repeat sizes who have never been documented to have HD symptoms beyond doubt. These mutations are longer than normal, but don’t cause disease, and we call them intermediate alleles.

To put the ‘gray area’ as simply as possible, a reduced penetrance CAG size (36-39) can sometimes cause disease in the individual inheriting it, and an intermediate allele (27-35) can’t. Researchers are interested in studying these gray area cases, because we think these types of mutations can grow when passed on, and are actually the source of new HD-causing mutations in the population.

A new study from researchers including Chris Kay and Dr. Michael Hayden of the University of British Columbia set out to better understand the frequency of reduced penetrance CAG sizes in the general population.

Why is this a new idea? Surely scientists have been studying the frequency of reduced penetrance mutations for years? Yes, but generally these mutations have been studied in families that are known to Huntington’s disease researchers – people from HD families who volunteer their DNA for study.

Kay and Hayden had the very clever idea to look at the rate of occurrence of reduced penetrance HD mutations in more than 7,000 people from around the world who have no known relationship to Huntington’s disease at all. They collected DNA from subjects participating in a range of clinical studies that have nothing to do with HD, to try and better understand how common reduced penetrance mutations are in the general population.

The remainder of the HD mutations found by Kay and his colleagues (15 of the 18 observed) were between 36 and 39, in the reduced penetrance range. Some simple math suggests that this means about 1 in 400 people in the studied population have inherited a reduced penetrance HD mutation – a rate about 10 times the previous estimates.

Time for a re-think?

This surprising finding was the source of a lot of bad headlines around the world. The Scottish Herald, who apparently can’t spell “Huntington’s”, led the pack with “Study: one in 400 people have Huntingdon’s gene”. Scary stuff!

But what’s really going on? If all these people – up to 1 in 400 – have HD-causing mutations, we’d predict about 800,000 of these folks just in the United States! While many of us believe that the true rate of HD may be under-counted, no one has suggested that there are 800,000 HD patients in the US!

An alternate explanation, and one proposed by Kay and his colleagues, is that the penetrance of HD mutations in range of 36-39 CAG repeats must be much lower than we previously thought.

Why is this? Previously, where did we learn about people who inherited these reduced penetrance mutations? That’s right – they showed up at HD clinics to be studied. This almost guarantees that the population was biased, because we were only studying the unfortunate fraction of people who have reduced penetrance mutations and go on to develop symptoms.

By opening up the lens and studying CAG sizes in thousands of random people around the world, Kay and colleagues have shown that this strategy might have been limited. As a consequence, reduced penetrance HD mutations may be much more common than we’d previously thought – but also possibly less likely to end up causing HD.

This study is a really good example of how good science, interpreted badly, can be seem very alarming, with press releases saying “as many as 1 in 400 people have HD mutations!” But, with the right understanding, we can see that it’s actually potentially good news – perhaps fewer people with CAG sizes of 36-39 get sick than we previously thought.

What causes some, but not all, people with a CAG repeat size of 39 to get disease? We don’t yet know, but this study provides another piece of evidence that at least some people can cope with an extra-long CAG without developing HD symptoms. Now that we know this, we can study those people to try and learn new tricks that we could apply to everyone else in the HD community.

Like all good science, this new research opens up a bunch of unanswered new questions. You can be sure that HD researchers are scratching their heads and heading back to the lab with an expanded understanding of human HD, and that important new studies are sure to result.