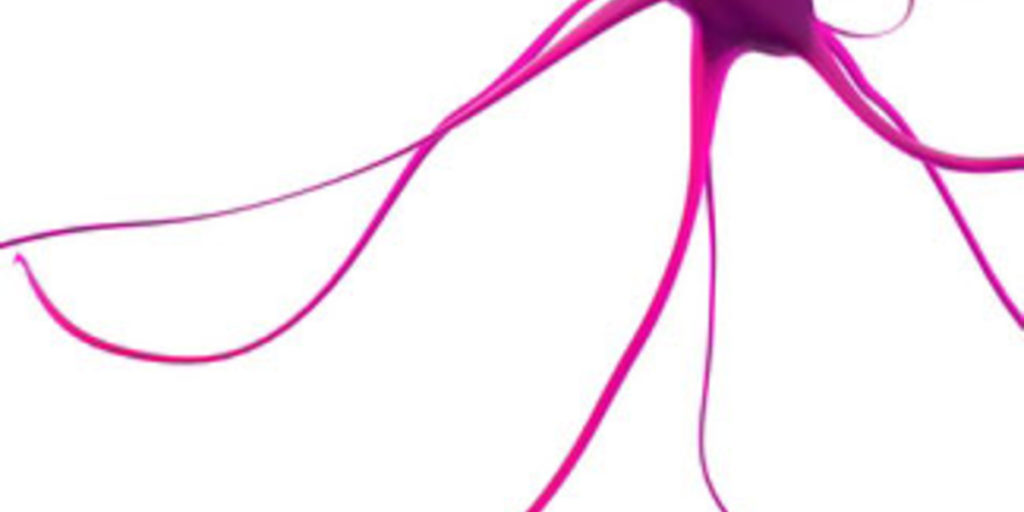 Certain regions of the brain degenerate more quickly than others in Huntington’s disease. Steven Finkbeiner’s team concludes that this discrepancy is based on differing abilities of brain cells in these regions to quickly identify and dispose of mutant HD protein. Specifically, neurons from vulnerable brain regions are slowest to clear the protein.

Know when to fold ‘em

Proteins are large biological molecules that perform various essential jobs for the cell. Once a protein has been made by stringing together amino acids in a specific order, the protein folds up like a pretzel into a unique three-dimensional shape. It is only when the protein is folded correctly that it can do whatever its normal job is.

Unfortunately, some proteins become altered along the way so that they no longer fold up correctly. In HD, a genetic mutation directs one of the amino acids in the chain of the huntingtin protein (Htt) to be repeated over and over, like a skipping record (or a stutter, if records are before your time).

This expansion causes Htt to fold up incorrectly, become toxic to the cell, and stick together into big clumps that scientists call aggregates. An appropriate visual would be hairballs clogging up a drain: loose, individual hairs are fine, but the big clumps stop it up.

In patients with HD, every cell of the body seems to have mutant HD protein around, but it is brain cells that preferentially die during the disease. This is why HD is a “neurodegenerative” disorder. In fact, not only do brain cells die, but within the brain certain populations of neurons die earliest, and so seem to be most vulnerable.

In particular, the region of the brain that exhibits the earliest and most severe cell death is called the striatum. The striatum is deep in the center of the brain. Its job is to coordinate voluntary movements, thoughts, and social interactions, and ensure that things do not get out of control.

Everything from stopping a conversation to stopping a movement is covered by the striatum. What is extremely important, but not currently understood, is why this area is so susceptible to degeneration in HD, while other regions seem to cope with mutant Htt for much longer before they die.

Take out the papers and the trash and the mutant huntingtin

Two possible explanations for these differences were explored by a research team led by Dr. Steven Finkbeiner at the University of California at San Francisco. One possibility is that there could be variability between brain cell types in the rate mutant Htt forms toxic structures. Basically, for each cell type, how fast do hairs become hairballs?

Another potential explanation for selective loss of cells is that different regions of the brain might clear out and dispose of mutant Htt differently. Are some cells just neat freaks?

The authors devised a technique that let them measure these folding and clearing properties in individual living cultured brain cells. They filled the cells with a glowing protein called “Dendra2”. This protein is neat, because it initially glows with a green color (like a kids glow stick toy), but this switches to a red colored light when it is illuminated with a specific color of light.

So, this tool enables you to grow some neurons full of green dendra2, then zap them with a light that turns the dendra2 red. Watching how long it takes the cell to replenish green dendra2 and get rid of the red dendra2 tells you how fast that cell is making new proteins (green), and degrading old ones (red).

Of course, we don’t actually care about dendra2. What we’d really like to know is how brain cells handle the normal HD protein, and if this is changed by the mutation that causes HD. To get at this question, the scientists used lab tricks to fuse a normal or mutant HD protein to the dendra2 protein. Now they could use the same light trick to follow the HD protein.

The Garbage Man can

Using this system, they noted that mutant HD protein was cleared from neurons in the striatum much more quickly than normal Htt. This is surprising – many scientists would have predicted that the mutant form of the protein would stick around longer, and that lingering causes it to accumulate into aggregates. It suggests that neurons are able to recognize the mutant protein and target it for clearance.

In fact, the automated microscope that Finkbeiner’s team has developed enabled them to see that the quicker an individual cell got rid of mutant Htt, the longer that cell lived. That makes sense – cleaning up the toxic garbage protects brain cells.

So, if the cell’s mutant protein detection and containment system works, where is the problem? It turns out that some neurons are better at this clearance than others, namely those of the cortex. The cortex is the wrinkly outer region of the brain. Generally cells in the cortex succumb to HD later than cells in the striatum. In hopes of understanding why, the authors compared clearance of the mutant HD protein in the striatum with clearance in the cortex.

Sure enough, neurons in the cortex were able to get rid of mutant Htt faster. Neurons of the cortex also lived longer than neurons of the striatum. The authors concluded that this is due to these regions having recycling pathways that differ in their abilities to clear out the mutant HD protein.

When proteins get old or worn-out, the cell has a system for disposing of or recycling them. The researchers explored whether their observations could be explained by effects on this degradation system. In particular, they focused on Nrf2, a protein that turns on the recycling pathway.

Scientists can study how different cellular processes contribute to things like cell death and recycling by cranking up the volume of a particular process, or dialing it back. In this case, because they believed that the recycling programs turned on by the Nrf2 protein are important, they can give cells more Nrf2, or take it away. This helps them establish whether a specific process is important.

This is exactly what they did to study Nrf2 and recycling of the mutant HD protein. Neurons overloaded with extra Nrf2 cleared mutant Htt faster than normal and were less likely to die. This suggests that cranking up the cell’s own recycling pathway could be a potential therapeutic target in HD.

Consistent with this idea, when the scientists artificially reduced the cell’s primary garbage or recycling pathways with drugs, the cells were less able to clear out mutant HD protein. So this specific recycling pathway seems crucial for enabling neurons to deal with this toxic protein.

What does this mean for HD?

The major finding of this study is that neurons from different brain regions do differ in their susceptibility to mutant Htt. It may provide an explanation for why HD starts in one place in the brain vs. another. The neat twist is that this susceptibility seems to be based on the differing abilities of these neurons to manage and dispose of the mutant proteins, rather than any intrinsic toxicity of the protein itself.

This is actually very important, because the capacity of neurons to manage mutant Htt provides an interesting avenue of potential therapeutics. Based on the results of this study, we would guess that treatments boosting the ability of neurons to clear out mutant Htt would help neurons live longer.

However, this interesting possibility must be considered in context. First, this entire study was performed using neurons that were grown in a dish. It remains to be seen whether this phenomenon will also be observed in the human disease, which is what matters most.

Second, these findings are preliminary, since the possible therapies described above do not yet exist. It will take time to devise something appropriate and test it in other HD models before it could be attempted in humans. For instance, no one knows what detrimental side effects might occur if the Nrf2 pathway were artificially dialed up for a long time.

The bottom line is that these observations are very intriguing basic HD science. And while there are still no approved drugs that attack the underlying problem in HD, studies like this one provide a better understanding of this dreadful condition helps clear the path to the development of new drugs.