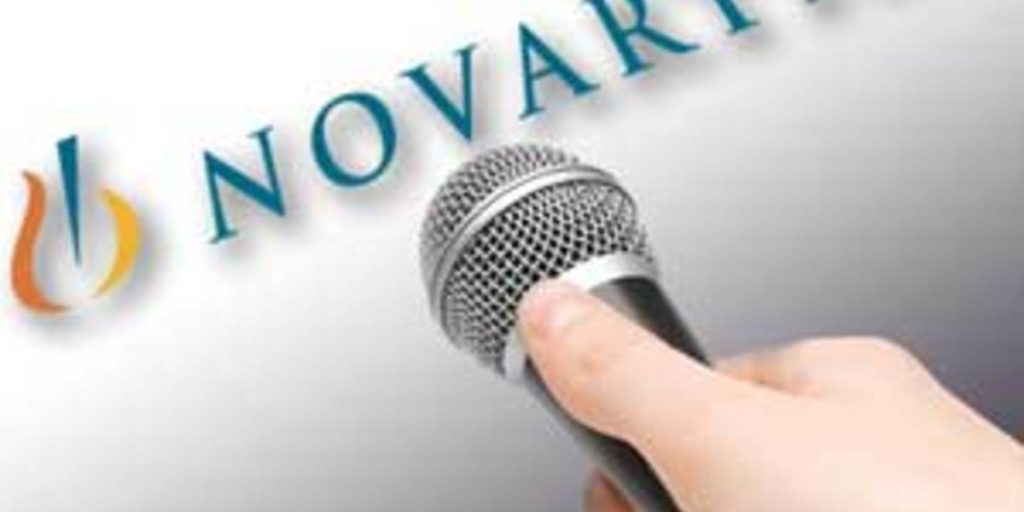 One of the world’s largest pharmaceutical companies, Novartis, has been working on treatments for HD for the last five years. HDBuzz interviewed Graeme Bilbe, Global Head for Neuroscience at Novartis, to find out more about their progress.

Ask any scientist who regularly attends Huntington’s disease conferences, and you’ll hear about the global HD research community’s unique spirit of cooperation and collaboration, and the close relationships between HD families and the clinicians and scientists working to find treatments.

Involvement of the pharmaceutical industry in HD research, though, has historically been rare. Drug companies have earned a bit of a reputation for being interested mainly in common diseases that could prove most lucrative. There’s even a name – ‘orphan diseases’ – for conditions so rare that it doesn’t make financial sense for drug companies to work on them.

In the past few years, that’s begun to change for HD. Pharmaceutical companies are increasingly getting interested in Huntington’s disease, and some have begun devoting significant resources to developing treatments. One such company is Novartis – the fifth largest drug company in the world and, according to industry insiders, the best at producing successful new drugs. Novartis has had a team of scientists working on HD for five years now and, as we shall see, they’ve made impressive forward strides.

Why is Novartis working on HD?

We started by asking Bilbe why Novartis got into HD research when, financially, it might seem more sensible to work on more common brain diseases. Degenerative brain diseases like HD and Alzheimer’s, he answered, are all “chronic, they’re slow, they’re really tough”, which makes them expensive to study and difficult to treat. In addition, most such diseases strike at random: “We don’t really know who are the patients we’re going to treat” so developing drugs to prevent them is even harder. After a long time trying, the pharmaceutical industry has found working with degenerative brain diseases very frustrating, with millions of affected people and very few successes.

HD is different, says Bilbe. Because we know exactly what genetic mutation causes HD, “we believe we can beat the odds. We know who the patients are, and that makes the whole process of drug discovery and knowing how to test your drug, and which patients it should work in, a lot more predictable.”

The value of knowing the genetic problem behind HD doesn’t stop there for Novartis. “To understand a disease, you have to understand the biological mechanism of disease,” says Bilbe, whose philosophy is simple when it comes to developing drugs. “Our strategy for approaching a disease is Gene, Pathway, Patient.” Knowing what gene problem causes HD is a huge head start, he says. “We’ve got a gene here – we’re trying to work out exactly what it does, we want to know its pathway, its mechanism of action – how it damages the cell and then damages the organism.” From there, researchers can identify the most promising ‘targets’ – individual steps in the pathway from gene to patient, that drugs might be able to alter.

Turning to specifics, we asked Bilbe which targets Novartis considers most promising. “We believe the disease is due to the accumulation of a mutant protein,” he answered, “so the most straightforward way to come up with a drug is to remove the protein.” His team’s main focus is developing drugs that increase the natural ability of cells to get rid of harmful proteins.

How is Novartis doing after five years? “We’re already testing our drug for movements in HD, ‘AFQ056’. For disease-slowing treatments, we have three approaches,” he says, “and one of those where I’m hoping this year we’ll take it into a clinical trial. So in terms of drug discovery I’m very pleased that within five years we’ve got something that’ll go into trials in patients.”

Five years might sound like a long time, but from Bilbe’s experience of developing new drugs it’s pretty quick. To get to a successful treatment, he says, “you usually need to be in business for ten years or even longer. It takes a long time to do this. It takes perseverance and long range vision. This is still early days but we are hopeful”

Developing new drugs isn’t cheap, either, and one major thing that drug companies can bring to a disease community is the huge up-front investments needed to make treatments a reality. “To do drug discovery you’re talking about a billion dollars on possibilities before you find one that actually reaches the pharmacy.”

Why is making drugs so hard?

The process is so expensive, says Bilbe, because of what he calls “attrition”. That means that the vast majority of ideas that seem promising when first explored don’t lead to drugs that work. “You might start off with ten thousand ideas, and probably a hundred of those ideas you’ll work on. By the time you get to human trials, those hundred ideas should have translated into a hundred drugs but they don’t – you might be down to two or three drugs, of which one might make it to the patient market. Every success is paying for all the things that fail.”

Why do so many good ideas fail to lead to drug treatments? Many things can go wrong, says Bilbe, because diseases like HD are so complex. Sometimes a promising target turns out on closer study not to be as important as first thought. Some targets prove impossible to ‘hit’ with a drug, however carefully designed the drug. Sometimes drugs work in the lab but have unexpectedly poor performance when tried in animals or humans, either not working or causing bad side effects. “These attrition rates are changing as we get better at what we do,” insists Bilbe, because of new approaches like his ‘Gene, Pathway, Patient’ model.

Novartis and the HD community

With all this investment, it’s easy to imagine Novartis working in isolation but the reality is very different. Bilbe’s team recognizes the huge progress the global academic HD research community has made, and collaborating with existing experts is central to Novartis’s approach to HD. “We’re trying to work with the premier clinical academic research groups in the world,” he says. Partnerships like this between academic and industry researchers are essential to most new drug discoveries.

The collaboration works both ways, and Novartis has already promised to share one of its most prominent successes with the entire HD community – a lab test that enables levels of the mutant huntingtin protein to be measured directly for the first time. Bilbe isn’t overstating things when he describes the test as “a watershed in this business” because knowing how much harmful protein is left is essential to measuring the success of treatments to remove it.

With the global HD community in mind, we wanted to draw on Bilbe’s experience of successful drug development ask what he thought HD patients and their families could do to help bring treatments closer. “We need to raise awareness that we have really viable chances of finding cures for this disease,” he replied. “The community has to be prepared that some of them will be disappointing, some will be ‘maybes’ and one or two of them might turn out to be something good. We have to be realistic. There’s going to be challenges in the clinical development of any drug. Without those disappointments we won’t learn.”

For all his hard-nosed realism, Bilbe remains cheerfully upbeat about the chances of HD researchers from science and industry finding successful treatments to improve the lives of HD-affected people. “We have huge mountains to climb,” he admits, “and we’re probably going to have disappointments along the way. To be optimistic, you’ve first got to be realistic, then you’ve got to have options. Once you have realism and options, you can begin to hope for success.”