Illuminating the progression of Huntington’s disease 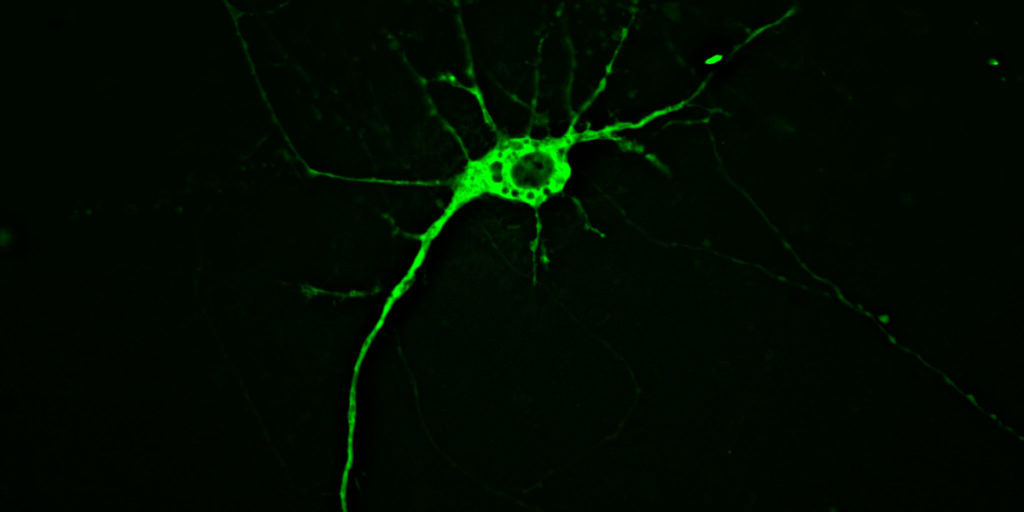 Huntington’s disease (HD) progression is a long process in which the first changes in the brain happen well before we even see symptoms in patients. It makes sense to focus our efforts on treating the earliest changes, to nip the problem in the bud. But what are these changes and how can we target them? A recent study has literally shed some light on this question. By creating HD mice with glowing brain cells, researchers at the University of Nottingham Medical School and the Babraham Institute in the UK have found that some of the earliest changes happen before these cells start to die, in a region of the brain where HD researchers have never before thought to look.

Turn on the magic of colored light

The mice in question have but a small percentage of brain cells, called neurons, lit up, and for good reason. Neurons can be thought of as miniature information processors that receive incoming signals at input structures called “dendrites”, process the information in the cell body or “soma”, and transmit the signal down a long thin wire called the “axon”.

The information is relayed to the next neuron’s dendrites to propagate messages throughout a vastly complex network — messages that coordinate our every thought, action, and bodily function. This complexity means that neurons are densely packed in amongst all kinds of other cells and material in the brain. So, much like the nostalgic Lite-Brite toy, illuminating a small subset of neurons and leaving the rest dark allows a clear picture to emerge.

Another reason neurons are difficult to study in the brain is that a neuron’s “output wire”, or axon, can run long distances. The neurons that control your body’s movements, for example, have their soma in the cortex, but send their axons all the way down to the spinal cord. That’s a long trip for a tiny cell!

Lighting up one entire cell allows investigators to trace an individual neuron from its dendritic input points, through the soma, all along the axon to its final destination in another brain area. This means they can ask whether abnormalities in an axon are associated with changes in the rest of the cell to which that specific axon belongs. Knowing which part of the neuron gets sick first could help scientists understand what processes go wrong earliest in HD.

The neurons of two different HD mouse models were illuminated in this way: one “transgenic” model and another “knock-in” model. The specific transgenic mouse they used has been engineered to carry a small chunk of the mutant HD gene. The knock-in mouse, on the other hand, has the HD-causing expansion “knocked-in” to its natural mouse version of the huntingtin gene.

The major difference between these two mouse models is the speed and severity with which they get sick. The transgenic model progresses much faster (showing symptoms at 12 weeks versus 12 months), which can be advantageous, for example to get quicker answers about potential drug compounds. The knock-in model takes much longer to get sick and has less drastic (sometimes more difficult-to-measure) symptoms, but more closely resembles what happens with HD patients, making it a more accurate model. Often in research, there’s a trade-off between accuracy and speed, and that’s the case with these two different models.

Bulges in the wire

While HD is a brain disease, the problems found in HD are not evenly distributed throughout the brain. Cells in certain brain regions are known to get sick and die earlier than others. A small region deep within the brain called the “striatum” is the most vulnerable part of the brain in HD, almost disappearing during the course of disease.

To study this brain area in HD mice, the research team compared the glowing neurons in each model at their respective early and late stages of disease. Surprisingly, in the transgenic mice, neurons of the striatum were found to be normal and healthy, despite the fact that the mice had a number of symptoms. This suggests that other factors, besides the obvious death or dysfunction of neurons in the striatum, must cause the HD-like symptoms seen in these mice.

As for the knock-in model, while the early-stage mice had normal, healthy-looking brain cells in their striatum, the late-stage mice showed regions of bulgy swelling in their axons. Axons, remember, are the transmitting wire of the neuron, carrying it’s message out to other cells in the brain.

Axonal swelling happens naturally during aging and in some brain diseases, but it happened earlier and more often in knock-in HD mice. Each axon’s corresponding soma (cell body) and dendrites (input structures), meanwhile, still looked healthy. This is very interesting, because it suggests that in this accurate mouse model, changes in the axon are the first to be seen.

If we assume that this mild mouse model represents an early stage of what goes wrong in the HD brain, these results might help us focus our energy on studying the right part of the neuron, particularly the axon. There is significant evidence of problems in axons in HD, and these results add support to the idea that these problems are worth understanding in HD.

The researchers weren’t content to study only changes in the striatum, however, they looked widely at other brain regions in hopes of identifying other early changes in the HD brain. Surprisingly, the region with the most axonal swelling was a structure near the striatum called the stria terminalis, which is involved in anxiety-related behavior.

Axons in the stria terminalis showed swelling even at the early stages of disease progression, and it got worse at late stages. Once again, each affected axon could be traced back to its soma (in yet another brain region called the amygdala), and these cell bodies were still healthy. This suggests that this brain region is also worthy of additional attention in HD.

A gramme in time saves nine

We never get tired of saying that even genetically modified mice are not HD patients, and no mouse model will be able to tell us everything about what’s happening in the HD brain. But the results of this study tell us that, at least in a model more similar to HD, axons show degeneration before the other neuron bits do. We need to think about which parts of the cell are sick before we can think about how to treat them, and while the knock-in mouse model has its limitations, it’s a good place to study axon degeneration during HD.

This work also tells us that the first site of decline in the HD brain may not be the striatum after all. To be sure, we may be missing some important information since not all of the neurons of the striatum were made visible by the glowing trick. But we certainly have a new brain region to explore, and if turns out to be the opening scene for degeneration, then it will make an attractive target for therapies that can stop the damage before it starts.