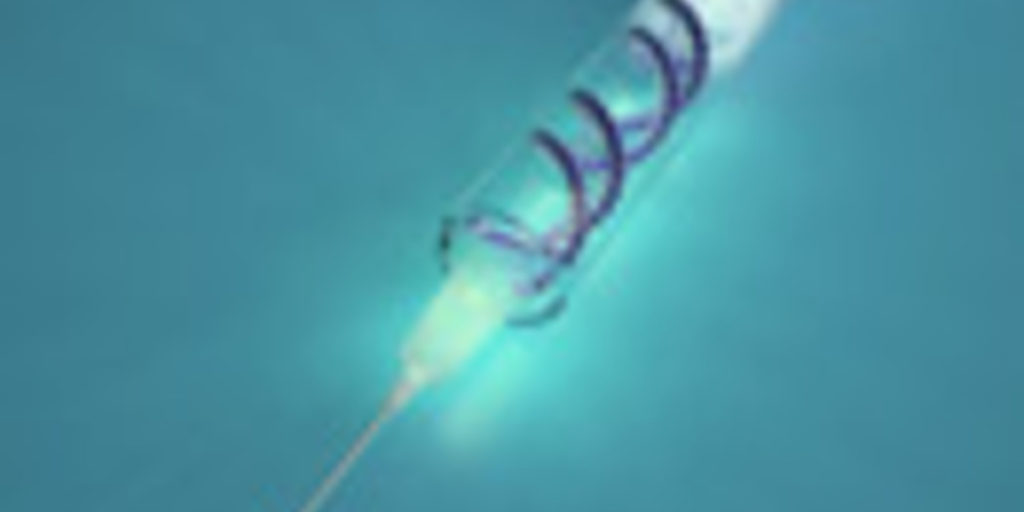 Gene therapy could correct spelling mistakes in our DNA, while stem cells promise transplant operations that don’t need powerful immune suppressing drugs. Scientists have now combined the two techniques in a genetic liver disease. Several challenges remain before this could work in Huntington’s disease though.

Huntington’s disease is one of many conditions caused by a genetic error. A mistake in the genetic recipe for the huntingtin protein causes HD. All cells carry this mistake in their genetic make-up and, as a result, produce the abnormal protein.

Common sense suggests the possibility of just going into cells and ‘surgically’ removing the faulty bit. But thinking about how large the entire genome is, in relation to the small size of the HD mutation – 6 billion letters versus just a few dozen extra letters in HD – recalls a search for a needle in a haystack.

Techniques to achieve feats like this have advanced in recent years, and it’s now possible to perform precision ‘genetic surgery’ in a test tube – but challenges remain, like the complex genetic manipulations needed to achieve a desired change, the luck of the draw in removing the mutation correctly, and the risk that genetic ‘tools’ left behind might cause harm.

Stem cells can divide into new stem cells, and develop into specialized cells including neurons.

Human beings develop from embryonic stem cells within the womb; these stem cells can form any type of tissue. But even as adults, we have stem cells in all our organs. And our understanding of stem cells has improved dramatically in the past few years.

It’s now possible, for example, to take a skin sample or pluck a hair and, using a special treatment, convince the stem cells in the skin or hair follicle to develop into different tissues. These cells are called inducible pluripotent stem cells, or iPS cells.

As discussed in a recent HDBuzz article, stem cell technology is in use right now as a tool for studying medical conditions including HD, and in the future may generate treatments, too. In fact, stem cells are already being used to treat certain blood disorders. In theory, stem cells could be used to re-grow entire organs, or bits of them.

Growing a new brain or using stem cells to repair the brain is currently well beyond our abilities. Another problem in HD is that because it’s a genetic disorder, the patient’s own stem cells cannot be used directly, since they also contain the genetic defect.

For the first time, scientists at the Wellcome Trust Sanger Institute and the University of Cambridge have combined stem cell technology with precision gene therapy. Their results were recently reported in the journal Nature.

They were working on a form of liver disease called alpha-1-antitrypsin deficiency, or alpha-1.

Alpha 1 is caused by a fault in a single pair of genetic letters. As a result, a protein made in the liver, and then usually released to protect the body from damage, gets trapped in the liver where it causes liver cirrhosis. Alpha-1 is one of the most common genetic disorders, affecting about 1 in 2000 people. The only treatment currently available is liver transplantation – which is a huge operation and means a lifetime of taking drugs to prevent organ rejection.

Led by Dr Ludovic Vallier, the researchers took a skin cell from an alpha-1 patient and turned it into a stem cell. They then used a much more refined genetic tool as a molecular scalpel to cut out the mutation, and replace it with the correct genetic letter. The stem cells were then treated so that they became liver cells. They did a perfect job as liver cells, including normal production and release of the healthy protein.

The next step was to inject these cells into mice, where they colonised the liver and worked normally for many weeks.

If this could be developed into a therapy for alpha-1, it could be much better than a transplant, because the use of a patient’s own stem cells means there’d be no need to take immune suppressing drugs.

What does this mean for Huntington’s disease?

These findings are obviously most hopeful for people with genetic diseases affecting the liver, but they’re also an important proof of the idea of combining stem cells and gene therapy to produce treatments, that could eventually be re-tooled for other genetic diseases.

Many questions still need to be answered before this becomes a real treatment option for Huntington’s disease.

In people with HD, the situation is even more complicated because the brain, unlike the liver, is mostly made up of cells that can’t divide any more. In the liver, you can tap into a self-renewal process that is going on all the time. If you introduce liver cells that are free of the genetic mutation, these cells can join that process. In the brain, as far as we know, there isn’t much self-renewal going on that could be harnessed in this way.

Some studies in HD have tried to use embryonic stem cells as ‘replacements’ for unhealthy neurons in part of the brain particularly affected by HD, the striatum. Results have been mixed, and we’re really only just beginning to understand the complexities of using stem cells to replace lost neurons and rewire the brain.

But it is interesting to speculate that, apart from avoiding the need for immune suppressing drugs, implanting a person’s own stem cells might be better than being given stem cells from somebody else.

An important extra hurdle is that HD is caused by damaging effects of a mutant protein, whereas the main problem in alpha-1 is a missing protein. It’s more of a challenge to prevent or reverse toxic effects than to replace something that’s missing.

Vallier’s team has been able to convincingly marry up two cutting edge science techniques – stem cells and precision gene therapy. But there’s a long way to go for those with genetic liver disease, and even longer for people with HD, until we’ll be making an appointment with a genetic surgeon.