Early exposure to the HD protein may cause life-long symptoms 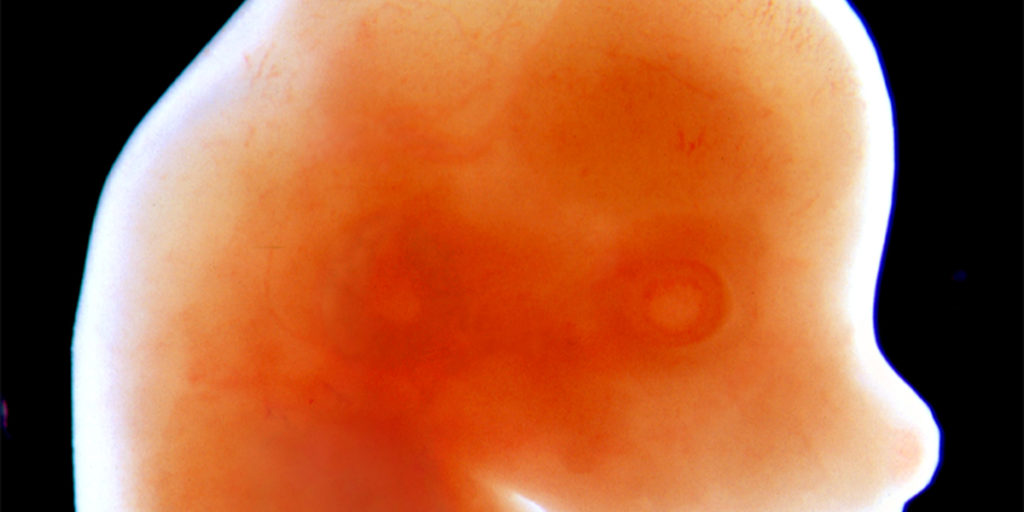 When the ‘healthy’ HD gene functions as it should, one of its many jobs is in the development of normal embryos. Researchers have long assumed that the ‘mutant’ HD gene inherited by people with HD is still able to do this job, since HD patients develop normally and don’t show signs until later in life. A surprising new finding suggests we may have to think carefully about this assumption!

The Hunt for the Function of Huntingtin

Those familiar with Huntington’s disease (HD) know that it is caused by a mutation in the gene that provides instructions to create a protein somewhat confusingly called ‘huntingtin’. Similar to a misprint in a cookbook, a repetitive stretch of DNA letters (C-A-G) in the huntingtin gene provides a faulty set of instructions for creating the huntingtin protein, ultimately altering its normal function and causing HD-related symptoms such as difficulties with emotional states, disturbances in mood, trouble thinking clearly, and movement changes.

Much in the way a large factory relies on the individual contributions from its employees, each completing small tasks for the whole thing to run smoothly, every protein in the body has a job (or many) to ensure that everything continues to function in an orderly fashion. When a genetic mutation arises – or there is a misprint in the cookbook and the instructions are no longer clear (like what occurs in HD) – dysfunction usually occurs because a protein no longer works as well as it used to, or because the ‘misprint’ now causes the protein to do something it normally wouldn’t have before. In either case, affected proteins are no longer capable of completing their job(s) correctly, and this eventually causes the symptoms associated with disease to emerge over time.

As it turns out, the healthy huntingtin protein has many different jobs that become impaired in a variety of ways during the course of HD. Because of this complexity, we still do not have a clear picture of what exactly is going wrong in HD. However, research conducted over the years has given us a good sense of many important processes the huntingtin protein is linked to. Notably, research using genetically modified mice suggests that the huntingtin protein plays a very important role in embryonic development and the formation of a healthy brain, since mice that have had their huntingtin genes “knocked-out” – or altered so they no longer produce the huntingtin protein – do not develop normally and are ultimately not viable to be born.

The question is, do critical alterations to normal brain development caused by the mutant huntingtin protein lead to a cascading series of events that cause HD-related deficits in adult life? Alternately, does this process occur in tandem with the ongoing toxic effects of mutant huntingtin throughout the lifespan? To put it another way, does the mutant huntingtin protein cause the problems that result in HD symptoms before our brains have fully developed, after our brains have developed in adulthood, or a combination of both?

Of Mice and (Wo)Men…

To address whether the mutant HD protein causes any developmental effects that emerge later in life, a group of researchers led by Dr. Mark Mehler at the Albert Einstein College of Medicine in New York used a mouse model of HD that was specifically bred to include a genetic on-off switch.

The switch system allows researchers to place markers on either side of a gene (in this case the HD gene), and delete the gene of interest in living mice by injecting a special drug at any point during the animal’s lifespan. This means that researchers studying mice with the HD gene surrounded by these markers can allow the huntingtin protein to be produced for any amount of time that they wish, then delete it and see what happens afterward.

Mehler and his colleagues took advantage of this technology, using it to allow the mutant huntingtin protein to be produced only during development and then silencing it afterward to see if mice still displayed HD symptoms later in life. In all, Mehler and his team examined three groups of mice: mice with HD throughout their lifespan, mice with HD only during development, and healthy mice.

These symptoms included enhanced vulnerability to toxins in the striatum (the most severely affected brain structure in HD), movement deficits, and the inability for cells in parts of the brain known as the cerebral cortex and striatum to communicate with one another – which spells big trouble for normal cognitive and motor functioning. Further, since silencing the mutant huntingtin protein after development was able to partially, but not completely, improve HD-related symptoms during adulthood, the findings obtained by Mehler and his colleagues suggest that HD-related deficits are caused by both the effects of mutant huntingtin during development and the ongoing toxic effects of the mutant huntingtin protein throughout the lifespan.

Importantly, the findings obtained by Mehler and his team suggest that HD-related deficits may in part be caused by the presence of the mutant huntingtin protein during development – perhaps even before birth. While these findings provide scientists with an important set of questions to consider when conducting new research, they also have implications for studies currently assessing gene silencing techniques as a therapeutic option in adult HD patients. If exposure to the mutant huntingtin protein during development is sufficient to cause HD-related symptoms to emerge later on, what would be the point of the current efforts to silence the gene in adulthood?

The truth is, gene silencing studies in animal models of HD have shown that reducing the amount of mutant huntingtin protein produced in adult mice can both improve HD-related symptoms and sustain these effects for an extended period of time – giving us plenty of reason to be excited and remain optimistic. Although this may seem at odds with the Mehler group’s findings, the gene silencing technique used in their study is vastly different from the silencing techniques being tested as a therapeutic option for HD patients. While discrepancies between HD model systems can confuse matters, it’s the additive knowledge we gain from individual studies that shapes our understanding of the disease. And now we have one more piece of the puzzle pointing to the notion that early intervention is likely to be the best strategy.

It is also worth noting that developmental problems that occur in human HD patients tend to be very mild compared to what is commonly observed in mouse models of HD. Most of the mouse models of HD rely on extreme HD mutations, many times more severe than those inherited by human HD patients. Studies such as Kids-HD, conducted by Peg Nopoulos at the University of Iowa, attempt to identify the earliest developmental effects in children at risk for developing HD. By identifying critical signs and symptoms of HD well before the current standards for diagnosis, Nopoulos and her team hope to discover new opportunities for intervention or treatment at the earliest possible time.