Chubby mice reveal the importance of the hypothalamus in Huntington's disease 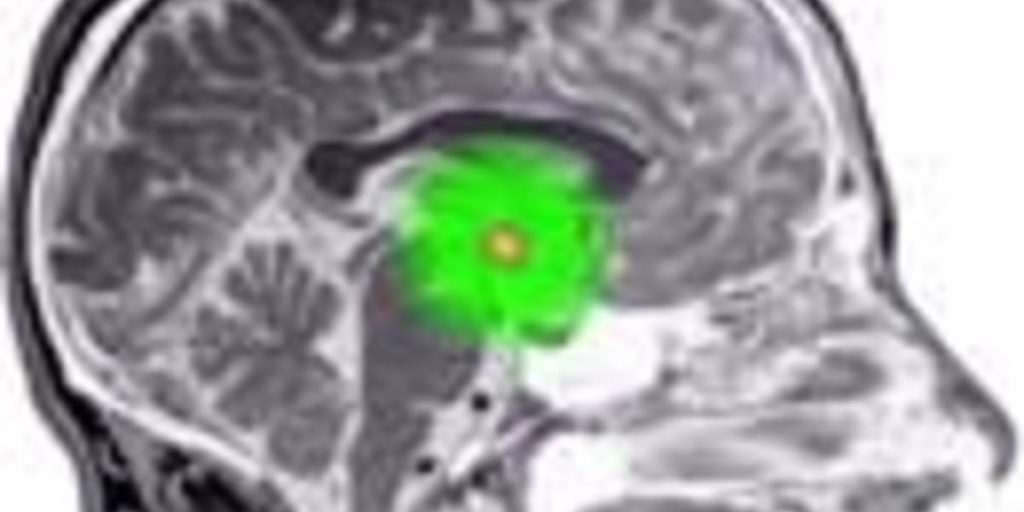 Weight loss, change in appetite and other metabolic abnormalities are major issues in Huntington’s disease. Now, a Swedish team of researchers has used genetically engineered viruses, and some fat mice, to reveal the crucial role of a tiny brain region called the hypothalamus in the metabolic problems of HD.

Many patients with Huntington’s disease lose weight, and maintaining a person’s weight can become a losing battle as the disease progresses. Scientists have struggled to explain why HD patients lose weight, even though they often have an increased appetite.

In a person with Huntington’s disease, the genetic mutation that causes the disease is present in every cell in the body. So it’s possible that direct effects of the mutation inside all those cells might be to blame for weight loss. For instance, we know that the way cells produce and use energy is altered in HD, and that could be due to direct effects of the abnormal huntingtin protein inside each cell.

The hypothalamus: small yet mighty

However, cells don’t act on their own – they receive signals from other cells which control their behavior. A tiny part of the brain called the hypothalamus is important in regulating many aspects of the body’s functioning, including things like controlling a person’s appetite. The hypothalamus does this by using hormones – messenger molecules released into the blood that alter how cells behave.

The way patients' bodies produce and respond to the hormone insulin is known to be altered in Huntington’s disease. Since insulin is involved in regulating a person’s weight, those alterations might be an important clue to the weight loss seen in HD. The hypothalamus also uses insulin as one way of measuring and controlling energy usage in the body – also called the body’s metabolism. This link made people wonder whether changes in the functioning of the hypothalamus might be to blame for some of the metabolic problems in HD

A group of researchers at Lund University in Sweden, led by Åsa Petersén, set out to investigate the role of the hypothalamus in these metabolic changes. Before we describe their work, we need to meet a fat mouse called BAC.

BAC mice are one mouse model of Huntington’s disease. They have been genetically altered to have an extra stretch of DNA that makes them produce the entire mutant huntingtin protein as well as their own, normal huntingtin protein. BAC mice get really fat – they’re nearly twice as heavy as similar mice that don’t produce the mutant protein.

It might sound weird to study a fat mouse when HD patients lose weight, but even though the mouse ends up looking different, it clearly has an abnormal metabolism caused by the mutant gene and protein. So, finding out the link between the gene and the metabolic changes might give us important clues to what’s going on in human patients.

First, the researchers carefully studied the BAC mice to try to figure out why they got fat. It wasn’t because they did less exercise – the BAC mice moved around as much as normal. Nor was it because they had a slower metabolism – they used up oxygen at the same rate as regular mice. The mice were overweight because they ate more than normal – like many HD patients, they had an increased appetite. The BAC mice were also less responsive to insulin – again, like some human patients. Finally, the team found that the hypothalamus of the BAC mice was less sensitive to another hormone, leptin – which regulates appetite.

Next, the researchers performed a really clever experiment. They took normal mice with no mutant genes, and injected a genetically-engineered virus into the hypothalamus. Viruses can be used to deliver genes to specific areas of the brain, and in this case the cargo was a mutant huntingtin gene.

The result was a mouse with a normal body and brain, except for the hypothalamus, which had the HD genetic mutation. Having checked that the hypothalamus produced the mutant protein, they studied these mice and found that they were highly similar to the BAC mice – even though only a tiny part of the brain had the HD mutation. Just like the BACs, they got fat, they ate more, and they responded less to insulin and leptin.

HD everywhere but the hypothalamus?

Having shown that the HD mutation in the hypothalamus alone can cause these major metabolic changes, Petersén’s team carried out an intriguing reverse experiment, taking advantage of a quirk of the BAC mice. The scientists who created the first BAC mice built in a special genetic off-switch that human HD patients don’t have.

So, using another genetically-engineered virus, the researchers were able to switch off the mutant HD gene in the hypothalamus of BAC mice – creating a mouse with mutant huntingtin everywhere except the hypothalamus.

These mice had normal metabolism and didn’t get fat – but only as long as the injection was performed when the mice were young. If the injection was given to older mice which were already fat, it didn’t improve things. This experiment proves that the hypothalamus can produce the metabolic abnormalities in BAC mice, but suggests it might not be to blame for keeping them going. Once they’ve developed, the problems seem to become self-perpetuating.

What does this mean for patients?

A few words of caution

It’s important to remind ourselves that this work was all done in mice, and it used techniques that wouldn’t work directly in humans. HD patients don’t have the convenient ‘off switch’ that the BAC mice have, and as we recently discussed in our ‘gene silencing primer’, switching off the HD gene in humans is a tough challenge.

The other thing to remember is that, at the moment, the overall significance of these changes in mice is uncertain. We don’t know whether the BAC mice with a ‘normal’ hypothalamus would live longer or have better thinking skills – they might just be thinner but remain unwell in other important ways. It seems very unlikely that restoring the function of the hypothalamus in patients would fix every aspect of HD.

Overall this is intriguing and important work which suggests that treating abnormalities of the hypothalamus could have beneficial effects much more widespread than its tiny size would suggest. Researchers are now working on ways to get the hypothalamus working better in human patients.

The research also reminds us that Huntington’s disease affects the entire brain and body – suggesting that we’ll need treatments that can reach far and wide in order to overcome all the effects of the HD mutation.